Amarillo Slim In A World Full Of Fat People is a memoir of an American poker icon. The book tells the story of Amarillo’s life as a Texas road gambler. It reveals to the readers some exciting tales about his fascinating life. From winning the WSOP to creating some crazy bets and becoming a worldwide celebrity 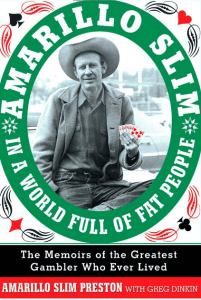 Thomas Austin Preston Jr., also known as Amarillo Slim, brought poker from the smoky underground rooms to America’s mainstream. He is one of the greatest gamblers who ever lived. As he described himself:

“If there is anything worth arguing about, I will either bet on it or shut up.”

One must never forget that deep down, Amarillo’s charm and folksy storytelling ability are what made him a real idol of America, and this book shows it perfectly.

Amarillo Slim, In A World Full Of Fat People, describes how he became an international celebrity with the advent of WSOP in 1970.

Amarillo Slim is one of the pioneers of Las Vegas, and he is well-known for his slim frame, huge Stetson hat, and those pithy remarks that he used to make during his poker game. He has played poker with some important personalities: 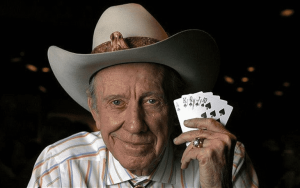 “I have played poker with presidents—Lyndon Johnson and Richard Nixon—and George Bush Sr. considers me a friend. And while I have never taken a drug in my life, I have rubbed elbows, for better or worse, with Texas drug king Jimmy Chagra and Colombian drug lord Pablo Escobar (who almost killed me). And the mayor of Las Vegas, Oscar Goodman, has a picture of me in city hall. Me—a gambler!”

Amarillo Slim tells various tales of his fascinating life. He has described some of his greatest gambling escapades. For example, he won $300,000 while playing dominoes:

“The more I won, the more people wanted to beat me, and, let me tell you, partner, the bigger they come, the harder their money falls. I beat Willie Nelson for $300,000 playing dominoes right on Fremont Street in downtown Las Vegas. I took Minnesota Fats for big money playing pool—with a broom. And I won too many wagers to remember from Evel Knievel, but the one everyone likes to talk about is the time I beat that old daredevil in golf when I played with a carpenter’s hammer.”

Humor and Psychology In A World Full Of Fat People

Amarillo fearlessly shares his tales of outrageous deaths, crazy bets, and some almost near-death experiences with great humor and humility. He is a true legend in the poker world.

You have to give him extra points for a good sense of humor. For example, this is how he describes his hometown, where btw. his Nickname comes from:

“Amarillo’s a good town, where the population has been 173,000 for the past fifty years, never varies—every time some woman gets pregnant, some man leaves town.”

Slim is also particularly sharp when it comes to human psychology. His words, “Gambling is a reflection of life. A man’s true character comes out when he is sitting at the poker table – his strengths and weaknesses, his good traits, and his faults. Whenever money is involved, you see the worst in people.” Firmly proves the statement.

Slim says,” it’s your job to triple-check the wording of any bet you make and to inspect the deck yourself because if you don’t, your opponent has the right to take every angle he can.” This quote confirms that slim had a remarkable ability to put his principles creatively.

The book might not improve your poker game as it doesn’t guide the readers through any strategies, but it will be truly entertaining for anyone who likes the history of poker and the intriguing characters of Poker World.

Once you start reading, it’s easy to get engaged in the story. Previously, I had known Amarillo Slim just as a poker champion. Now I see him as a super-hustler and a prop better.

This book is kind of his whole life’s philosophy summed up in a nutshell which is an excellent deal for true poker lovers. It is overall a great story of a ruthless gambler and an unstoppable poker player. There is no doubt that Amarillo led quite an exciting life.

Amarillo means "yellow" in Spanish, and while some of them historians here tell me that it was chosen because of the color of the soil in Amarillo Creek, my theory is that it was chosen to describe the disposition of the gamblers in town—at least until I arrived.

I'm fixing to tell you a few things that I've been keeping to myself for a lot of years. If you're not careful, you just might learn how to get rich without ever having a job.

If there's anything I'll argue about, I'll either bet on it or shut up. And since it's not very becoming for a cowboy to be arguing, I've made a few wagers in my day. But in my humble opinion, I'm no ordinary hustler. You see, neighbor, I never go looking for a sucker. I look for a champion and make a sucker out of him ...