Caro’s book of poker tells, a book of 320 pages is one of the best-known books in the history of poker. This book is undoubtedly a bliss for those willing to be most successful in the field of poker. Over 170 pictures, along with simple descriptions in the book, guide you through bluffing techniques. Hundreds of poker players today are using Mike Caro’s teachings… 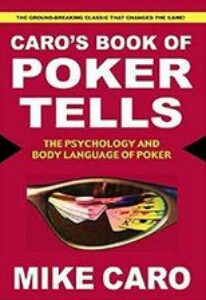 He has written seven books till now, all of which have turned out to be great success.

Caro’s Book of Poker Tells guides you through a player’s psychology and body language, thus instructing you when others bluff and when they don’t.

To pioneer the modern strategies of poker, Mike Caro has used various mathematical analyses as well. A serious player’s library should have this book, which by many is considered one of the ten most excellent books ever written on poker!

In the book, the author has tried to evaluate the psychological aspects of the game. Caro’s Book of Poker Tells is broadly divided into two sections:

The book deals with the players’ mannerisms, hence revealing the secrets of interpreting tells, basically the player’s physical reactions that reveal information about their cards.

According to the author, there are always two situations. One is where the player acts, whereas, the second, is when the player does not act and is unaware of giving out poker tells.

The first few pages of the book solely focus on the conditions where the players do not act. For example, the way a person arranges and re-buys his chips reflects the kind of player he is.

‘Glimpses of an opponent’s true nature can often be gained by watching the way he stacks his chips. The very organized manner in which these chips are arranged suggests that this player will probably choose his hands carefully, seldomly bluff and won’t display a lot of gamble.’

The player who generally shows off is willing to take more risks, whereas the discreet one prefers fewer risks. Mad Genius instructs that a player who looks away is often more dangerous than the player who stares at you.

Many more theories of poker hands are explained well with charts and pictures. Caro has used the reference of MCU poker charts to explain the concepts of poker in an easier way.

The book helps you to understand the subconscious signals that opponents reflect without a clear awareness.

To be a great player and achieve success, you must never give away tells once you spot them.

Once you glue the poker players’ truths mentioned in the book altogether, you will begin to understand the game much better.

At the end of the book, Mad Genius offers you a quiz to test your poker tells knowledge.

Guiding about some brilliant and original poker moves, Caro’s Book of Poker Tells is extremely easy to understand. The diagrammatic description and use of various pictures make it much easier to understand Caro’s 23 laws of tells.

Since the book deals with players’ psychological aspects, it might seem a little less helpful to some because these days, most players, even at an amateur level, are experts in keeping their gestures and expressions uniform.

Nevertheless, you will probably still find useful information about the body language and your opponent’s subconscious tells, even if you are an experienced player. This book might get a little tedious and repetitive but is still a great read.

Caro’s Book of Poker Tells is a fantastic read and by far one of my favorite poker books about body language.

It teaches us that one must always stay focused and observe the players at a poker table very carefully.

For those who like live poker, especially cash games, this book provides handy information.

The content is clear and easy to understand, thus making it equally useful for beginners. The book is worth a place on your poker bookshelf, and the great, old-school poker pictures add extra value to its content.

‘Photo 23: The man in the suit has made his bet, and now he takes a drag from his cigarette.’ 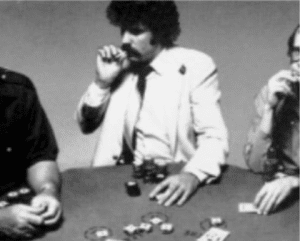 Mike “the Mad Genius of Poker” Caro was born May 16, 1944, in the US. He is a professional poker player, author of poker books, poker scientist, and casino executive.

He has discovered and clarified some of the most critical gambling concepts ever written. He is an authority to many famous poker players. Caro is one of the best draw poker players alive, according to Doyle Brunson. However, Mike claims that draw poker is not even his strongest game. Most of his discoveries have been in hold ’em, seven-card stud.

Mike is a computer genius who uses his programs for his research. He is known for his involvement in the psychology and philosophy of gambling.

He is the founder of Mike Caro University of Poker, Gaming, and Life Strategy, Caro is recognized as “The Mad Genius” of poker for a good reason. Much of his teaching is unique and very deep. Yet he explains everything in a very easy to understand and transparent way.

Mike Caro has written many books about poker, including:

You can find his Tournaments’ results here

‘A long-time poker professional once said he could beat anyone at poker with his eyes closed. What he meant was that his opponents told him the strength of their hands just by the sounds they made.’

‘A genuine smile usually means a genuine hand; a forced smile is a bluff’

‘The friendlier a bettor is, the more apt he is to be bluffing’

‘If a player looks and then checks instantly, it’s unlikely that he improved his hand’