You won’t get the moniker The Madman in the poker world if your playing style is not aggressive and fearless, and Gus Hansen’s undoubtedly is. The Great Dane, as he is also referred to, has left the key to his brilliant poker mind ajar in the form of his book Every Hand Revealed, which takes players through every single hand of the 2007 Aussie Millions tournament he won by outlasting 747 players. 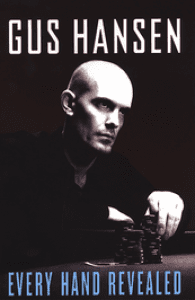 Citadel Press published Every Hand Revealed in 2008. It is a personal and methodical, 370-page long account of Gus Hansen’s march to winning the podium of 2007 Aussie Millions and the prize of $1.2 million.

Gus Hansen is a professional poker player known for his so-called crazy playing style and the only player to win three World Poker Tour tournaments. He is also the first player to win the Poker Superstars Invitational title, and his 2007 Aussie Millions run allowed him to cap off his fifth major title.

Every Hand Revealed is a niftily crafted book that provides a detailed account of each of the 329 hands Gus Hansen played at 2007 Aussie Millions in its eight chapters.

Each chapter covers three days of the tournaments, except for the final day which is described in four chapters. The final chapter also offers advice, a statistical overview, and a sort of strategic recap.

Gus supplies ample information for every hand, such as the level of the blinds, the position at the table, his hand, stack, and more. While playing he records each hand:

The revealing is made possible because of the little tape recorder that I always bring to the tournament tables. After having played a hand, I take a couple of steps away from the table to record the ac- tion. In addition to describing the play of the hand, I also take note of my opponents and whether they have displayed any patterns, mannerisms, etc.

What readers get is a literal description of not only his hands but some of his opponents’, backed with abundant commentary. This is what makes this book perfect for both novice and experienced players wanting to get into the razor-sharp logic, facts, and analysis.

Gus Hansen’s writing style contains little to no prose and is certainly devoid of flamboyant language and poker generalizations. The book’s focal point is specific situations and hands, how he reacted, read the bluffs, and the reasoning behind all of these moves.

You won’t find any biographical filler content, personal anecdotes, and game philosophy if that’s what you’re looking for. Instead, it gives an insight into Hansen’s head and outlines how his aggressiveness and the ability to adapt to the situations made him a champion.

The author clearly displays how he takes full advantage when antes rise concerning blinds and how his raise and reraise patterns are not conditioned by him having premium hands since only a small percentage of them were like that. Still, he would enter the pots even with those hands, showing how those can be good enough when you want to go for the win under the right circumstances.

Every Hand Revealed is a perfect choice for all students of the game willing to dig deeper into the technicalities and what goes under the surface.

Those who are more into the life stories of poker players and other narrative discourse should look elsewhere for such content.

Again we are looking at two completely different approaches. 1.Limping with a lot of hands, trying to see cheap flops. 2.Playing ultra conservative, only entering pots with top-notch hands. Approach number one relies on superior post-flop play and that someone around the table will make a serious deep-stacked mis- take. It is often used by players who believe themselves to have an edge against the rest of the field, which means just about every poker player in the world.

Since the beginning of my professional career, I have often been called “the madman” by people believing I am insane, making loose plays with any hand, calling large bets with seemingly unplayable hands, and raising out of position with garbage holdings. There is, however, logic behind the madness. My approach to poker is mathematical and analytical and in my mind this is the only way to win in poker. My aggressive style has nothing to do with being macho at the poker table—it is simply the right way to play the game. Lucky for me, I have five major international titles to prove it.

What Do The Pros Say About Gus And Every Hand Revealed

Gus has done something that is very difficult to do: He’s brought original thought to an age-old game. Many of his ideas on how to placonventional strategies I thought to be true. I look forward to read- ing his book and know that I will definitely learn something from it. poker have made me take a second look at some
Chip Reese