So, you think you have what it takes to be a WSOP Main Event player? Well, even if you don’t right now, Greg “FossilMan” Raymer’s book entitled FossilMan’s Winning Tournament Strategies might be what Dr. Poker ordered to take you to that next level… 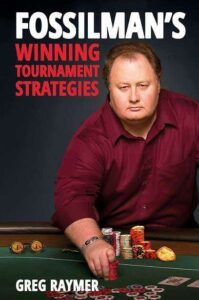 FossilMan’s Winning Tournament Strategies is an ultimate guidebook on poker tournament strategies written by Greg Raymer, the winner of WSOP’s Main Event in 2004 and a proud owner of 5 HPT titles. Raymer has enjoyed considerable poker success, winning over $8 million in tournament awards over his 30-year long career as a professional poker player.

FossilMan’s Winning Tournament Strategies is conceived as a manual or, as Raymer himself put it:

“A bible for tournament poker.”

The book deals with all the intricacies and details surrounding poker tournament strategies play and is intended to help both novice and experienced poker players hone their poker skills.

What readers will find most illuminating is the fact that he describes the complex math behind the ICM strategy, pot odds, and bet sizing in simple and understandable language using real-life poker hands. The book exudes Fossil Man’s mathematical and logical approach to the game and includes tips on strategy changes in satellite and rebuy tournaments and other uncommon tournament formats you don’t get to see in most other poker books.

The practical advice ranges from the technical nature of the game to how to handle emotional
situations when big pots are at stake. For example, in chapter 32 in FossilMan’s Winning Tournament Strategies, Raymer talks about how to keep your emotional cool when you lose big stacks. He went from a 120k stack to 60k in a tournament game where the average stack was 40k. Instead of going on tilt, he kept his cool by thinking:

“How would I feel right now if I had started the last hand with 30K and doubled to 60K? I would feel awesome.”

The book is structured into multiple chapters where each chapter can be taken as a separate whole since they deal with different topics altogether. The language style FossilMan uses shows his teaching background, as he has taught for the WSOP Academy on several occasions. He gets straight to the point with simple and easy-to-follow language.

On the other hand, apart from the satellite and rebuy tournaments’ tips, not much in his book is original. Many of the topics have already been analyzed by poker writers such as Ed Miller, so originality is not its strongest suit. The information presented is indeed detailed and accurate, and given the complex math behind the ICM model, it’s no wonder he dedicated an entire chapter to the PokerStove program.

However, in the chapter, Raymer neglected to explain how to do the complex math involved. Instead, he plainly states the math results, which might generate confusion. Besides, the PokerStove program is considered a bit outdated, and explaining Pio Solver or other such programs could have made the book more relevant.

The structure of chapters resembles that of some magazines, which allows the players to sift through the content easily. Beginners who are more interested in the mind games behind the game of poker will relish chapters on bluffing and how to bet, while more experienced players will learn more on special plays and situations, and how to play against all-in bets.

FossilMan’s Winning Tournament Strategies is an exciting read as its scope ranges from the psychological aspects of tournament poker and the game’s philosophy to detailed math and analytics that players who wish to opt for the Independent Chip Model of play will need. Raymer is a player of great caliber, but is also a fundamentally sound teacher, as he talks about poker strategies such as playing with the big blind ante in-depth, but in an understandable and confusion-free way.

I find FossilMan’s Winning Tournament Strategies to be detailed, illuminating, and a valuable read to all who wish to elevate their tournament strategies. On a negative side, he didn’t provide info on how to do ICM-related math. Otherwise, the book is thorough, and with all the advice he shared on how to play in WSOP events, its practical value is undeniable.

Gregory ‘Fossilman‘ Raymer, whose nickname originates from fossils he uses as card protectors, is most known for winning the 2004 World Series of Poker Main Event. He walked away with $5 million, which until today is a big part of his total live winnings. Of the $5 million, Fossilman took home $1.7 million, after giving his backers their portion of the profits and paying taxes.

Here you can see the final hand of the event:

Interestingly most of his tournaments earnings come from WSOP events

His best WSOP finishes include:

Similarly to Chris Moneymaker who won the WSOP one year earlier, Greg Raymer was an “amateur” player when he took down the WSOP main event title. He qualified for the Main Event via a $160 satellite. Winning the WSOP helped him become a member of the PokerStars Team, which he had been part of until 2011.

In 2013 Raymer was imprisoned for soliciting a prostitute. As a result, he had to complete 75 hours of community service, and the charges were dropped.

‘When it is early in the tournament, you are really just playing a cash game. The only reason that you shouldn’t play exactly the same way you do in your regular cash game is that your typical tournament opponent is playing differently than your typical cash game opponent.’

What Do The Pros Say

‘Having played a lot with Greg over the years, I know he plays a great game. Having taught with Greg, I know he’s even better at teaching poker. But what really sets Greg apart is his skill at the final table. He has won over 30% of the times he made the final 9, and has won 70% of the times he made the final 3 in a no-limit or pot-limit game! Amazing!’
Joe Hachem
Greg Raymer came out of nowhere to win the WSOP Main Event. Then he backed it up with two more deep Main Event runs, and impressed me! Greg has continued to impress with many more deep runs and wins.
Phil Hellmuth
‘Greg takes a logical and mathematical approach to the game, and teaches that approach very well. He has taught for the WSOP Academy and held his own boot camps around the country for years helping players improve. This book will help any tournament player to improve their game.’
Chris Moneymaker

Big Deal: A Year as a Professional Poker Player