Secrets of Professional Tournament Poker Volume 3 is the third volume of Jonathan Little’s book series on poker strategy. He is one of the best poker players in the world today and a great coach. Jonathan has made more than five million dollars playing in poker tournaments… 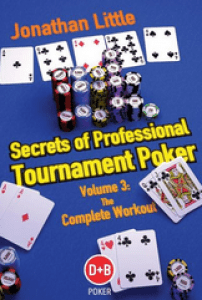 In this day and age, it’s hard to choose an excellent practical poker book from the countless books available. However, the Secrets of Professional Tournament Poker Volume 3 (SOPTP III) is an insightful poker strategy book written by Jonathan Little, back in 2013.

Volume three is mainly a sequel to Little’s other books released in 2011 and 2012, respectively. But, unlike the first ones, which present a game plan for winning Hold ’em tournaments, this focuses on teaching readers how to implement the strategies and fundamentals described in the first two books.

The format used, question and answer, is easy to understand for both pro players and amateurs. Plays for each hand are rated on a scale of 1-10, with 1 being the least good and 10 the optimal play. Scores are given after a reader answers all the questions provided for each hand. Then, for all the options, there are explanations offered for that particular choice. As Little puts it,

“In no time, I am clear you will have a clear understanding of why I play the way I do.”

Moreover, the author has included many hands from three different tournaments that he played in. Players learn how to analyze the limited information in a particular hand.

Is the book for beginners or advanced players?

Little puts readers’ knowledge to the test and attempts to turn amateur poker players into pros using his experience as a World-class poker player. Still, SOPTP III provides little help to beginners on its own. It is best read with the other SOPTP series books to learn the various concepts first before completing the workbook. Most beginners will find themselves a little lost going through the hands if they have not read the first two books.

Another critique is that since Little uses actual hands and not hypothetical hands, there is a lot of repetition in the gameplay.

This final book in a three-volume series is a definite go-to book for taking your game to the next level. Having 150 explanations from a top tournament player for the choices made in actual hands also helps readers gain greater insight into the game. The question-and-answer style used makes it simple for anyone to understand.

It is important to always think about your opponents and their ranges. A player who plays a perfect robotic style will win significantly less than a good, but not great player who adjusts well to his opposition.

Understanding the right reasons for particular plays is the key to improv‐ ing at poker.

Video - Jonathan Speaking About The Book