Ship IT Holla Ballas, the most successful poker crew of all time, transformed themselves from Internet nerds with zero life skills into great poker legends, at least in their minds. It is a story of college dropouts, united by 2+2 forum, making their way to the top of the game during the online poker boom years.

How did it all start?

It all started in 2004, these enthusiastic teenagers realized that they had an aptitude for the game. They tried to decrease the luck factor and relied on studying, practicing, and reading helpful poker books to improve their game.

Ship IT Holla Ballas presents some of the most successful poker crews that emerged from this new world of social media and online poker grind. 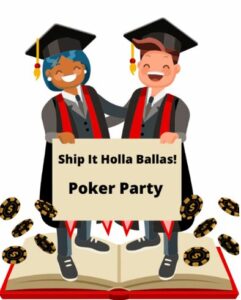 Ship IT Holla Ballas is a true story of the rise of poker through the inexperienced eyes of a few college teenagers. The book dictates the story of how these teenagers, united by the emerging platform of today’s legendary 2+2 forum, forced their way to the top of the game.

“At the start of 2005, Irieguy puts word on 2+2 forum that he and SkipperBob are planning a trip to a tournament at L.A.’s Commerce Casino in February and asks if anyone wants to meet up. The most enthusiastic response comes from Raptor, who over the course of the last year has earned a lot of respect for his insightful strategic posts—many Two Plus Twoers credit a thread he starts about folding big hands near the end of a tournament as one of the greatest influences on their games. Raptor tells Irieguy he’d love to meet in L.A. and asks if he can share a hotel room with him and SkipperBob.”

Who are the players mentioned in Ship It Holla Ballas?

The people mentioned in the story are not just mere characters but well-known poker players, making the read very enjoyable.

The authors don’t use the actual names of the players but the crews’ 2+2 poke forum nicknames. Although, any poker enthusiast can always find the players’ names mentioned in the book, so did I.

I have researched and created the below list of the real names to make the read even more enjoyable.

From today’s perspective, many years after the book was published, it is interesting to see what these guys are up to. 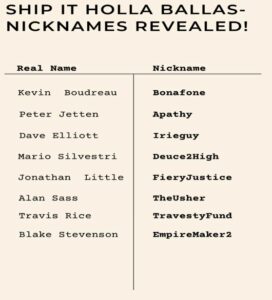 Winning millions of dollars, they always partied like rock stars!

If you are planning to read this book, be ready to experience strippers, booze, drugs, and Rolexes because that is what happens when a bunch of 19-year-old college dropouts suddenly become millionaires.

It is exciting and beneficial for self-development to know how young, inexperienced individuals deal with their success.

The story begins with the introduction of some college dropouts, but the way they get success and the pattern in which the story ends are pretty impressive. The book ends with Black Friday, Full Tilt poker collapse, and a lot more not to be discussed here.

The book includes some old-school, must-see photos, of the main characters from their more youthful days, which helps to put names on faces. Additionally, many of the pictures are hilarious and will make you laugh if you are familiar with the main characters.

Observing these players in their element before they became pros made me smile. It felt like having access to their Instagram-banned photo albums.

What are the main Pros of the book?

What are the book negatives?

The only negative I want to mention is that there is no detailed description of the dates and places of the events, which gives you a chance to question the book’s accuracy.

Reading it can be fun for regular players and those who want to enter the poker world, as this book will give them motivation and courage to learn and succeed in poker.

2. Is Ship it Holla Ballas available also in audiobook format?

Yes, Ship It Holla Ballas is available in audio, and the even better news is that you can get have it with an Audible subscription for 9.99$ in the US.

3. Who narrated the audiobook version of Is Ship it Holla Ballas?

The audiobook version is narrated by the author himself, Ryan Holiday.

4. Is there an official book website for Ship it Holla Ballas?

Yes, there is an official website for the book at http://shipitholla.com/.

5. Will there be a Ship It Holla Ballas sequel in the future?

No, there is currently no plan for a sequel.

After reading a few chapters, I felt excited and curious to read more to know what happened next.

It is, without a doubt, one of the best non-strategy books I’ve read in recent years. However, if you are looking for a book to improve your game, this book is not for you.

“To the uninitiated, poker may seem like any other form of gambling. You’ve got to get lucky at the right time. The players who call themselves “pros” are basically shrewd masters of human psychology, able to outguess their opponents, spot their unconscious “tells,” and pick the right time to make a daring bluff.”

“There are only two signals emitted from the poker universe: 1. The universe will unfold as It should: 2. If you play the right way, and your opponents do not, you will win. Everything else is noise, and to make too much of anything that doesn’t expressly involve the two above facts is to pave the road to failure.”

“The original plan is to become a plastic surgeon, until a rotation in Obstetrics and Gynecology unexpectedly rocks his world. During the most exciting twenty-four hours of his life, he assists in two live births, an emergency C-section that saves a baby’s life, and a successful cancer surgery. There’s no combination of drugs and alcohol that can top the buzz he gets from introducing new lives into the world. He is literally delivering happiness. Forget facelifts and tummy tucks. Irieguy has found his true calling.”