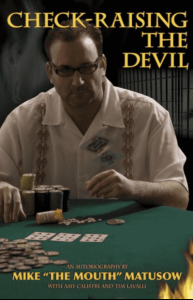 The autobiography of one of the most explosive poker players of all times is very entertaining. The book was released back in 2012 and won the hearts of countless readers. Check Raising The Devil was written together with some professional writers, Tim Lavalli and Amy Calistri, and published by Cardoza Publishers.

This book will make you believe that Mathew is a great poker player born with extraordinary gifts. He provides a detailed description of notable events that have taken place in his life, which has been portrayed like a roller coaster ride.

Matusow is introduced as a low-level employee in the family business in Nevada. The book begins in Matusow’s adulthood when he is in his twenties. He was living the life of a degenerate gambler living in a small trailer. Like any other gambler, Matusow also had a habit of depositing his savings in the casino industry.

My story starts in a trailer park out toward Boulder Highway, in a dead-end patch of Las Vegas where people never lived their dreams, if they even had any. There were old people living there, families with too many kids, and people who didn’t seem to be going anywhere in life. People like me, hanging out and chilling, wondering what their next move would be. I’d hang out with my dog, that is, until he died, and watched TV until I fell asleep. My meals were generally junk food or pizza, or I’d grab something at the Showboat or Sam’s Town, casinos where I tried to buy hope one quarter at a time.

When Matusow meets a local poker player, he starts working under him. Consequently, the player teaches him various poker strategies, and it doesn’t take much time for Matusow to realize that poker was, in all terms, better than other casino games. Hence he cracked all the poker strategies quickly and developed a great liking for the game.

Detailed description of various poker events won by Matusow is mentioned in the book. During the late 90s, after working his way through the low stakes, Matusow moves to Vegas and California to play mid and high-stake games. Along with a decent amount of income, he also earned a name in the poker world.

The success of this talented player continued for many years until he got charmed with parties and drugs. The story also tells how being a drug addict and party insect spoiled Matusow’s life. Check Raising The Devil serves as a cautionary tale for those who think drugs and parties won’t affect their lives.

It’s pretty interesting to read how somebody earning a tiny amount of money to sustain his life comes on the top of the poker world, earning enough to fulfill all his desires. One can not say that the book’s writing style is extraordinarily appealing, but it is a fun read for people who enjoy playing poker.

Check Raising The Devil is quite engaging in terms of its plot. Because, the author goes deep into what he has done, in both good and bad aspects of his life, and how he simultaneously fits into the poker world. Therefore, if you are a poker fanatic, you should consider having this book in your library.

Although the text fails to justify some things and events, for example taking drugs during WSOP, it is still an entertaining piece.

The book will alert you about the ill-effect that one can have due to excessive parties and drug abuse. After seeing what Matusow has been through and who he is as an individual, it’s easy to form a positive opinion about him and become his fan.

I highly recommend it to all the poker fanatics who are fond of party too.

Later, just before poker got big, Todd Brunson and Curtis Bibb started calling me Mike "Loud Mouth" Matusow. I definitely didn't like that nickname, which is exactly why they used it — Todd still calls me that today. My mouth opened the minute I walked into a poker room, and that was never going to change. But I was afraid that when television started to pick up on poker, the "Loud Mouth" nickname might catch on. So I managed to insert Mike "The Mouth" Matusow into a couple of conversations and thankfully everyone liked it.

I was an idiot. I took a little bit of the meth, and boom — everything was back to normal. Actually, everything was above normal. At the tables, I knew what everybody had. I started playing at a ridiculously high level. In the next five months I won over $1 million in live poker action. Let me say that again real slow: In less than five months, I won over $1 million in the cash games. I was a fucking money machine!

At the first break, a friend and I went up to his hotel room in Binion's to do a line. I talked about how the meth was giving me such great focus and how it was the wonder drug of all wonder drugs and how I hoped nobody else would discover it. Speed makes you talk a lot, which wasn't exactly an area where I needed any help. That's why it was so easy for me to cover up my meth use; I had always talked so much that no one noticed the difference. When we got back down to the tournament room, one of the sound techs came over and said, "You know, Mike, there's an off switch on that microphone." "Oh, shit! You didn't hear all that, did you?" I asked. "Don't worry, Mike, we can keep that to ourselves," he said. I looked over and saw the entire television crew smiling at me; they knew everything. I was lucky those guys were roadies. I don't really know what I'd have done if they hadn't been so cool about it.

Things were pretty good for me at the start of 2001. I had a hot girlfriend and was playing poker well enough that I didn't have any real money pressures. Teri and I cut the clubbing back to weekends and I went to work four days a week at the Bellagio. Teri treated me well, she really cared for me, and life around the house was pretty great. Sometime before the 2001 World Series, I remember joking about "Black Tuesdays." After a weekend of partying, with Monday as a day of recovery, the first day back at the Bellagio was always hard. Paying attention for a full day of poker was pretty difficult and Black Tuesdays were becoming a drain on my bankroll.

Foreword: Mike the Mouth’s Heart of Gold
1 Dead End Dreams
2 Drugs and Disorders
3 High on Poker
4 The Grind
5 Other People’s Money
6 The Almost Bracelet
7 Hard Lessons at theFinal Table
8 On My Own
9 I Have a Dream
10 Out Of The Shadow
11 Cards Make You, Egos Break You
12 The Day tha Changed my Life
13 Main Event Meth
14 Without a Net
15 Stuey’s Ghost
16 Up-for Another Series
17 Last Tango in Paris
18 Judas Revealed
19 Phone Call in the Alps
20 Playing on the Precipice
21 Island Payday
22 Six Months Flat
23 Last Dance at the Horseshoe
24 A Champion’s Vindication
25 Bipolar Poker
26 My “Dark” Series
27 A Series of Changes
28 WSOP: A New View
29 Now I Know
Glossary

Check-Raising the Devil is Mike's up-and-down story of rock-star-like partying and excess, success at the highest levels of the poker world, a monstrous fall from the mountain, and a huge comeback all the way back to the top of the mountain. Today, most of you sincerely like Mike "The Mouth" Matusow — but love him or hate him, you will not be able to put this book down!